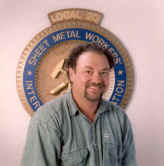 Brad was born in Mishawaka, Indiana. He is married to Diana, and they have three children, Shea, Lacy and Matt. Brad served his apprenticeship from 1981 to 1985 when he became a Journeyman Sheet Metal Worker.